It’s the middle of July and I’ve got a fair amount of empty garden area. After harvesting the garlic, pulling out bok choy and broccoli that bolted in the heat and an empty lettuce patch, I’m feeling the need to fill space. I have winter seedlings coming along in other areas of the garden, so that’s covered. What I need is a short-term crop that won’t require a lot of maintenance because we have summer holidays planned. Potatoes!

Potatoes would be great! Plant them, mound them and leave them until harvest! New potatoes can be ready in a little as 10 weeks, and by the end of October (14 weeks from now) there will be plenty of spuds for fall. I went down to the local nursery to search for seed potatoes but they were sold out. I then checked out a few more places for seed potatoes but had no luck, which was really disappointing. On a whim, I stopped in at the grocery store on the way home. Maybe I could purchase a small amount of organic potatoes (usually expensive but worth it) and see if they would sprout and then I could plant them.

Score!! I found 5lb bags of BC Organic Russet Potatoes for $9 per bag. Ouch! That is pricey, but if I could turn the 5 lbs of organic potatoes into 20-50lbs of organic potatoes by growing them … then it would be win-win! As I was deciding whether or not to buy one or two bags of potatoes, I noticed that they were growing eyes! Now, potatoes that have sprouted eyes are NOT the best for consumer sales. People tend to think that potatoes which are sprouting are not great for eating, and that thought process has its merits.

When potatoes sprout, the starch in the potato is converted into sugar. If the potato is firm, it has most of the nutrients intact so it can still be eaten after removing the sprouted part. However, if the potato is wrinkled, it should not be consumed. A potato sprout (eye) can be toxic, but you’d have to eat many sprouts to get sick. They are toxic due to high concentration of glycoalkaloids, which can have an adverse effect on our nervous system.

Sometimes potatoes develop a green tinge after being exposed to sunlight. Green areas also have increased concentration of glycoalkaloids but you can safely cut the green parts off and eat the potato.

What all of this meant for me, on this particular day, was that the organic-sprouting-potatoes should be sold at a reduced price, in my opinion. I approached the store’s produce manager and asked for a 50% discount. He denied my request for a 50% discount …. and instead offered me a 100% discount (FREE!!) Then thanked me for noticing the sprouted spuds and for using them in a positive way, because otherwise he would have had to throw them out! So of course, I took the 6 FREE bags!

Once again, the message is loud and clear, ask and you shall receive 😉 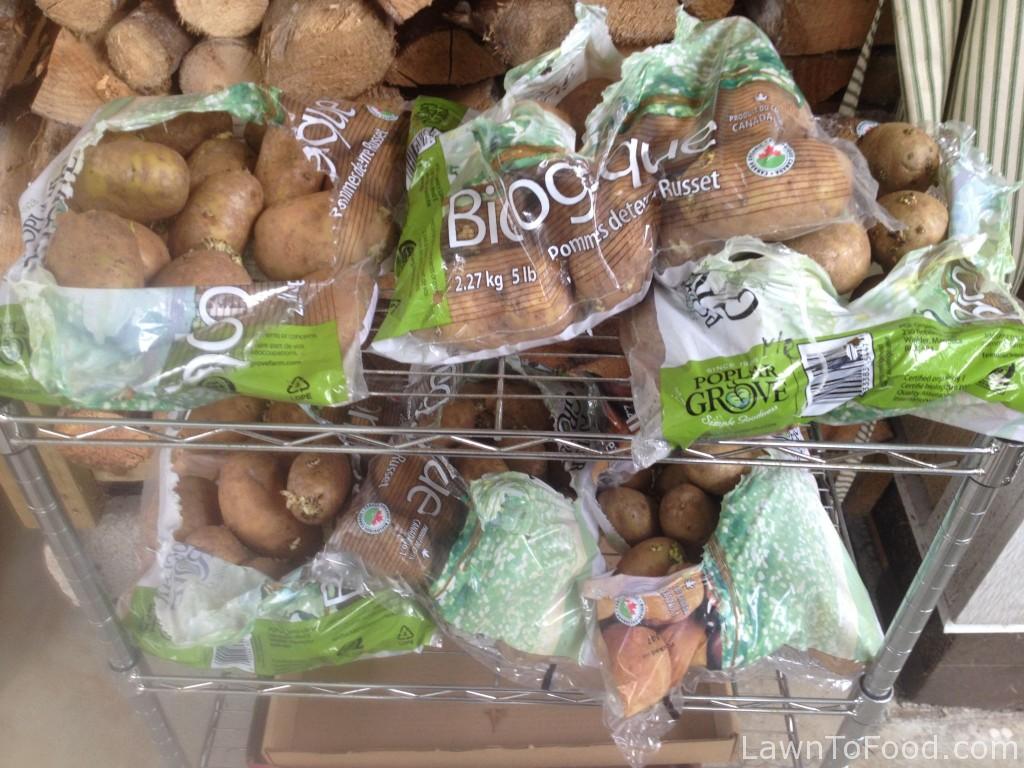