Raspberries can be their own worst enemy, especially when left un-pruned. When raspberries are left to grow wild and haphazard, the canes get very overcrowded. These thick masses, left in moist, shady conditions become susceptible to myriad of fungal diseases. A thick patch of raspberry canes will also have to compete with each other for sunlight, water and nutrients, which can lead to sparce, small fruit. 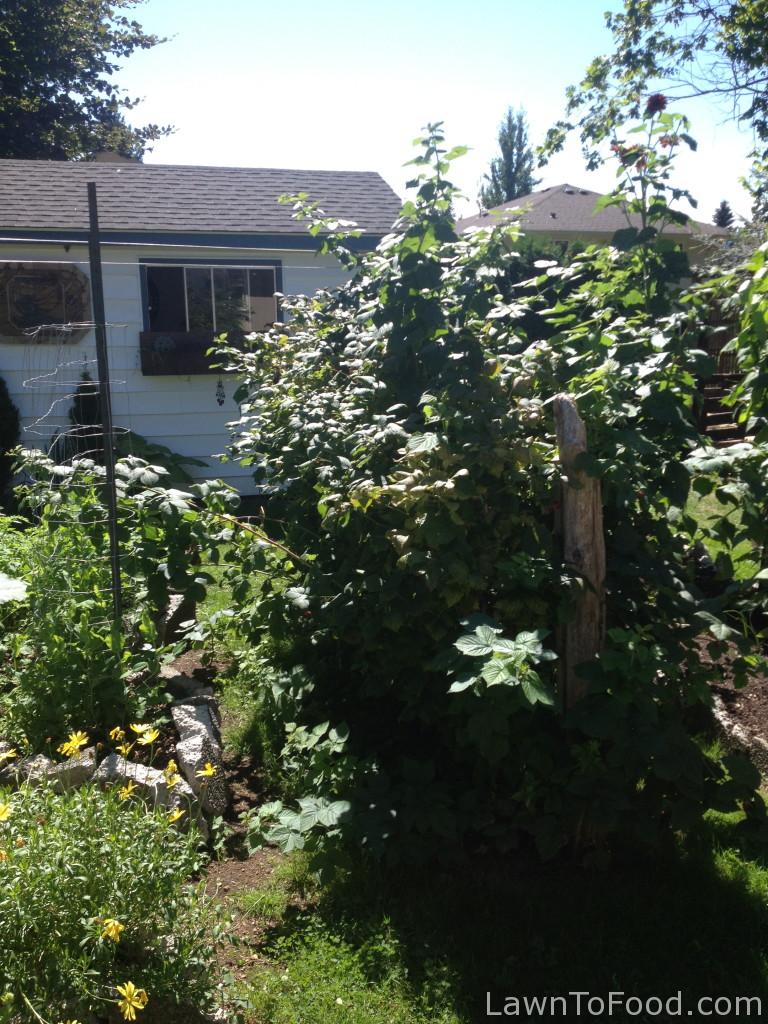 My shady, thick, overgrown raspberry row. It’s new, 5′ tall primocanes are falling left and right, covering the garden path. Many new raspberry suckers are growing in the pathway as well.

Annual pruning, and maintenance, is the most effective way to help your raspberry rows produce a bounty each season. Thinning raspberries lets the air flow through the canes, allows you access to pick the fruit and enables the water and sunlight to enter, producing sweet juicy berries. 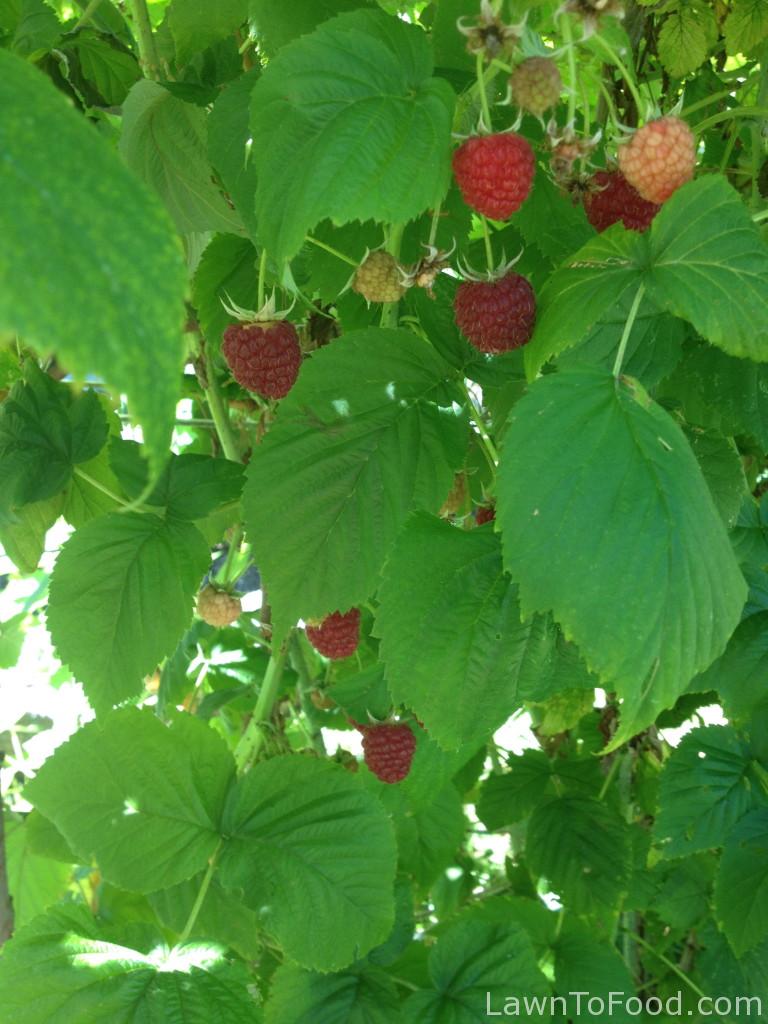 Our bumper crop of 2014 raspberries. This 7 foot long row produced over 30 pounds of fruit for our freezer, daily breakfast & salad toppings plus I sold countless baskets at the farmstand.

Raspberry roots, and the crown, are perennial but the canes are biennial (they live for 2 years). In the first year of growth, green primocanes shoot up from the crown. Those green canes will produce fruit the following season and then are called floricanes. Once floricanes have produced a bounty of raspberries, their usefulness is over. Their stocks are brown and woody, and their leaves start to turn yellow as fall approaches. 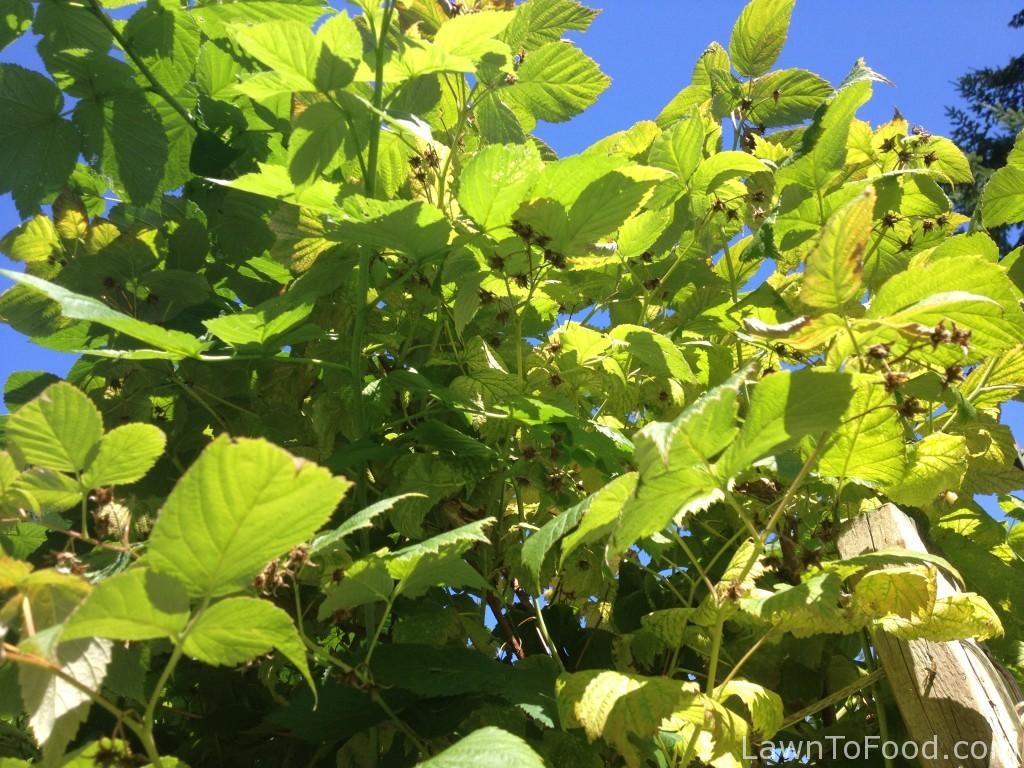 All of these raspberries have been picked, in the last 5-6 weeks, off of the 2-year-old floricanes. The canes are woody brown in color and the leaves are starting to yellow.

Typical raspberry gardening advice is to wait until late fall, or early spring, to prune raspberries. I am just not that patient. I like the garden to look tidy and of course, I want to ward off any disease potential, as our Pacific Northwest rainy season approaches. So as soon as the berry harvest is complete, I start to prune the old canes out, allowing the new canes to settle in for winter. This year I also want to dig up the raspberry suckers that are growing in the pathway to start a new row for next season. Digging up the suckers now (August), will give them some time, in their new location, to get a root hold before the winter freeze. 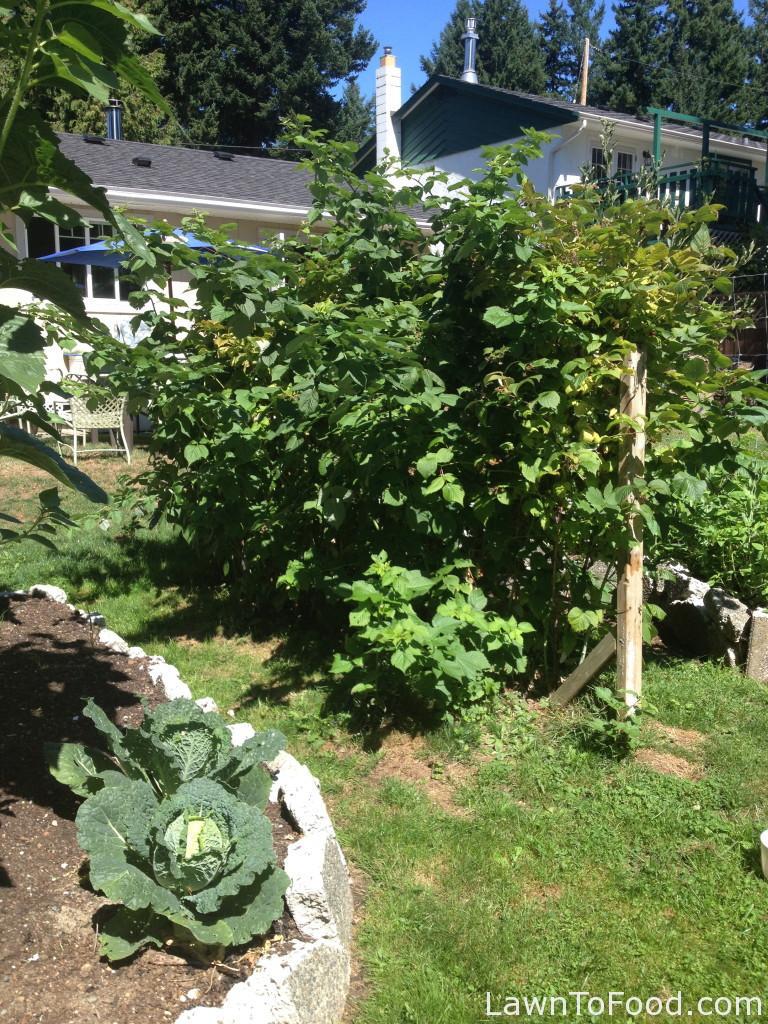 The starting point … I’m going to head into the base of the raspberries with my pruning shears and cut off all the brown, woody canes. I am also going to cut out any of the green canes which appear thin, weak or bent (as shown below). My goal is to leave 3-6 thick, green, primocanes per linear foot for my 2015 row of raspberries. 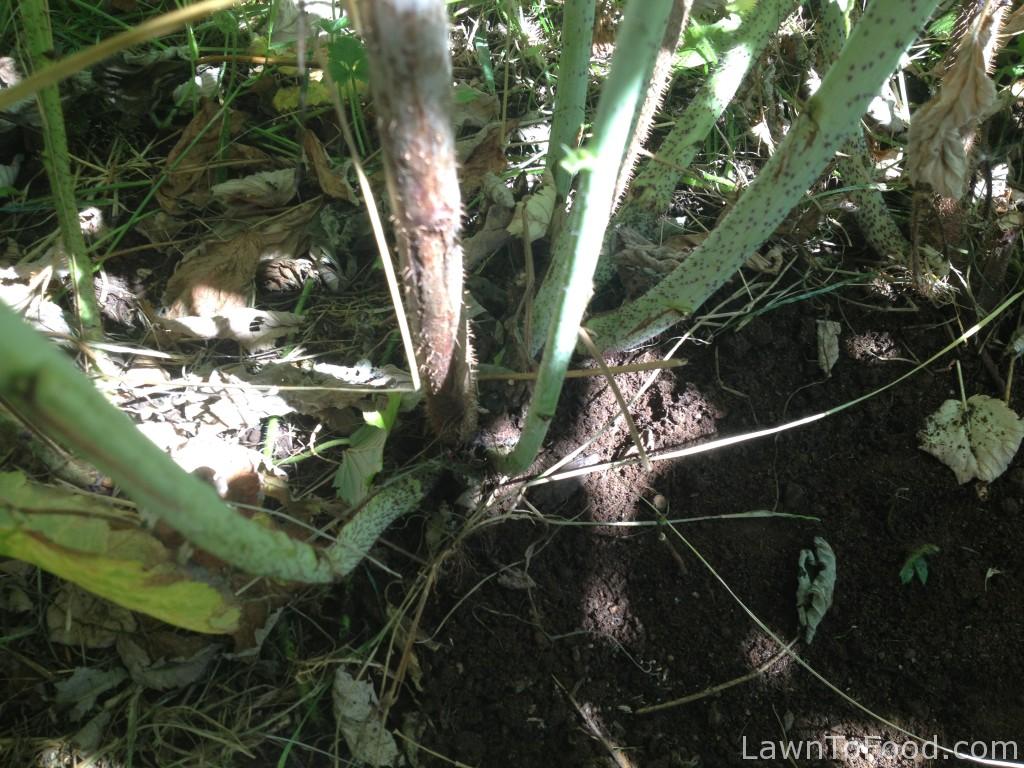 The photo shows that I am most of the way through my pruning adventure. The pile of spent canes is much larger than what is left in the row. 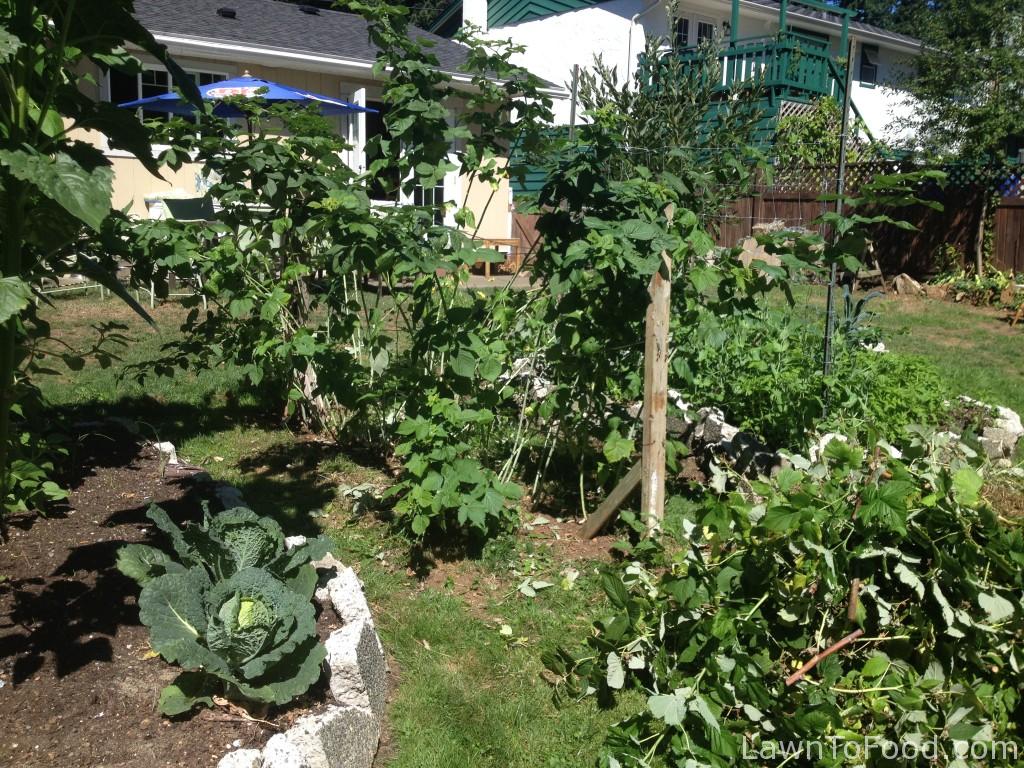 In my next step, I untied the raspberry row’s guide wires. I have three levels of guide wires, bottom, middle and top which are made from clothesline cable. I suggest that you only undo one side at a time. I started with the right side and re-strung the top wire first, gathering up all the primocanes behind it.  I threaded the clothesline cable through the 2×4  and pulled the line tight. 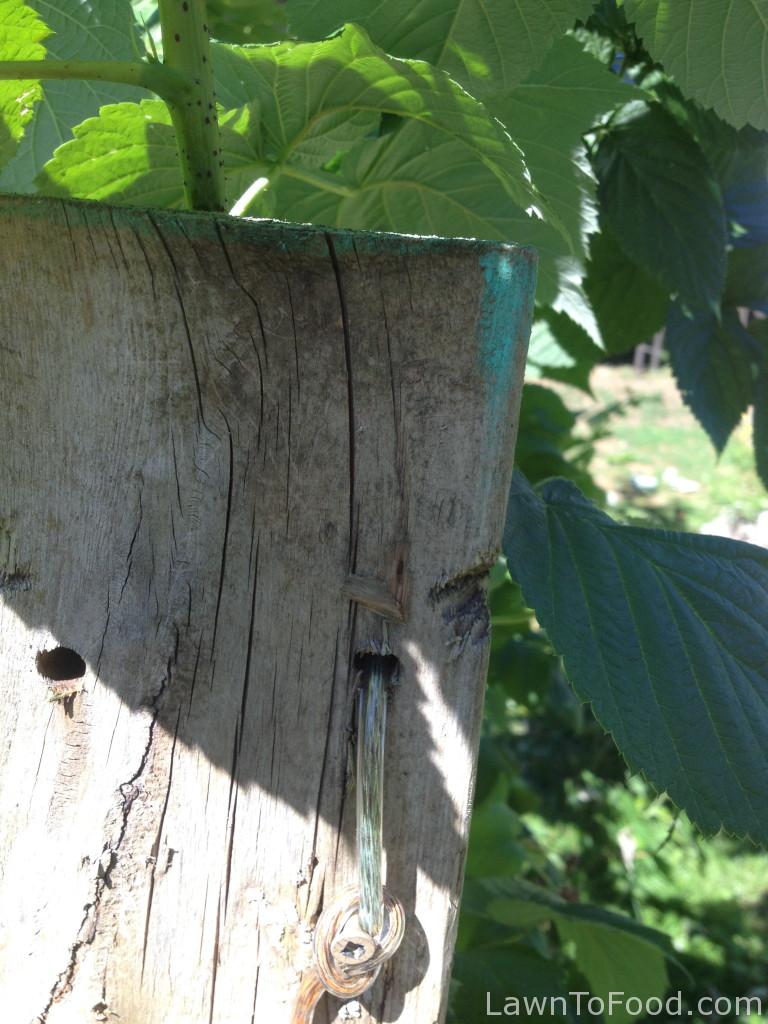 After tying a knot in the line, I pulled it even tighter and then secured it with a screw onto the 2×4. I continued this process with the middle and bottom lines on the left side and then repeated the whole thing on the right side of the raspberries trellis.

The next step is to tie the support lines together to provide a stable environment for the young canes.  One year I tied each cane directly to the guide wires but this is an efficient way to save some time and provide the same result. 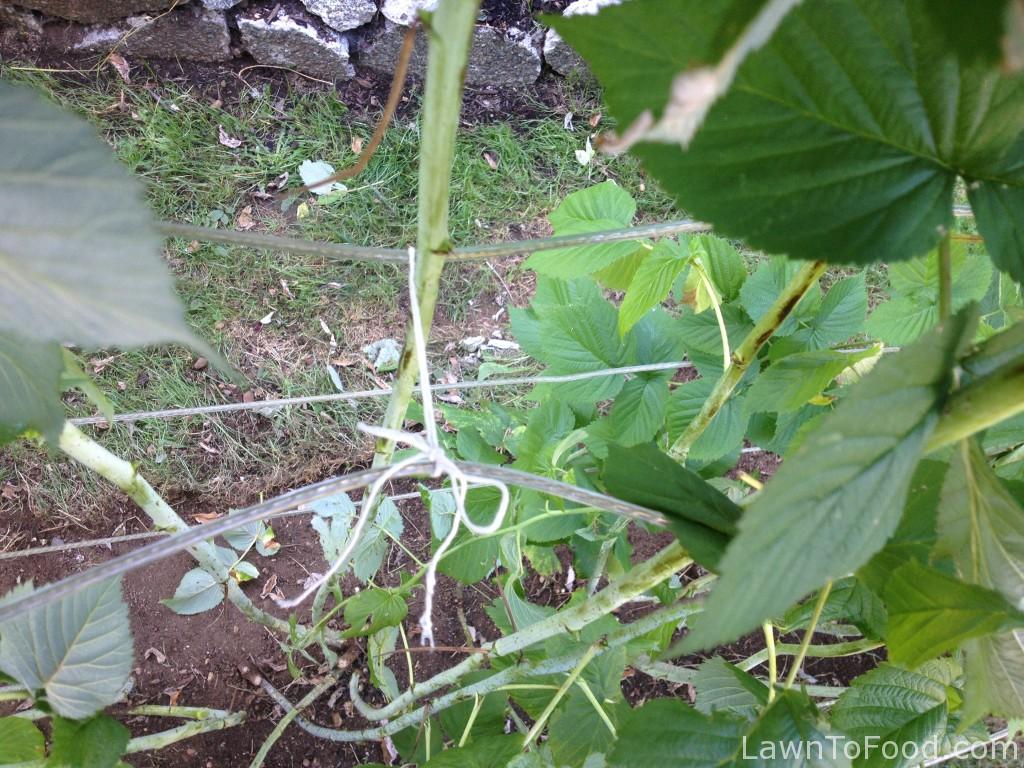 Once the guide wire was re-strung and the lines were tied together, it was easier to see the work I had accomplished. I ended up pruning out a few more weak, young canes to reach my goal of ony 3-6 canes per linear foot. I also trimmed to top of each cane to a height of 5′. Come spring time the 5′ canes will send out tons of branching shoots, each of which will produce lushious clusters of raspberries.

Tadaa! A neat and tidy row of fresh raspberry canes, waiting to produce a 2015 crop. It’s easy to see how the air will beable to circulate around the canes to help ward off disease. The tight, narrow row will also faciliate easy picking next season. During this pruning session, I also pulled away all of the mulch from the base of the raspberries. This temporary mulch removable will help ward off disease and rain rot. In early spring, I will side dress the raspberry row with compost and aged manure. 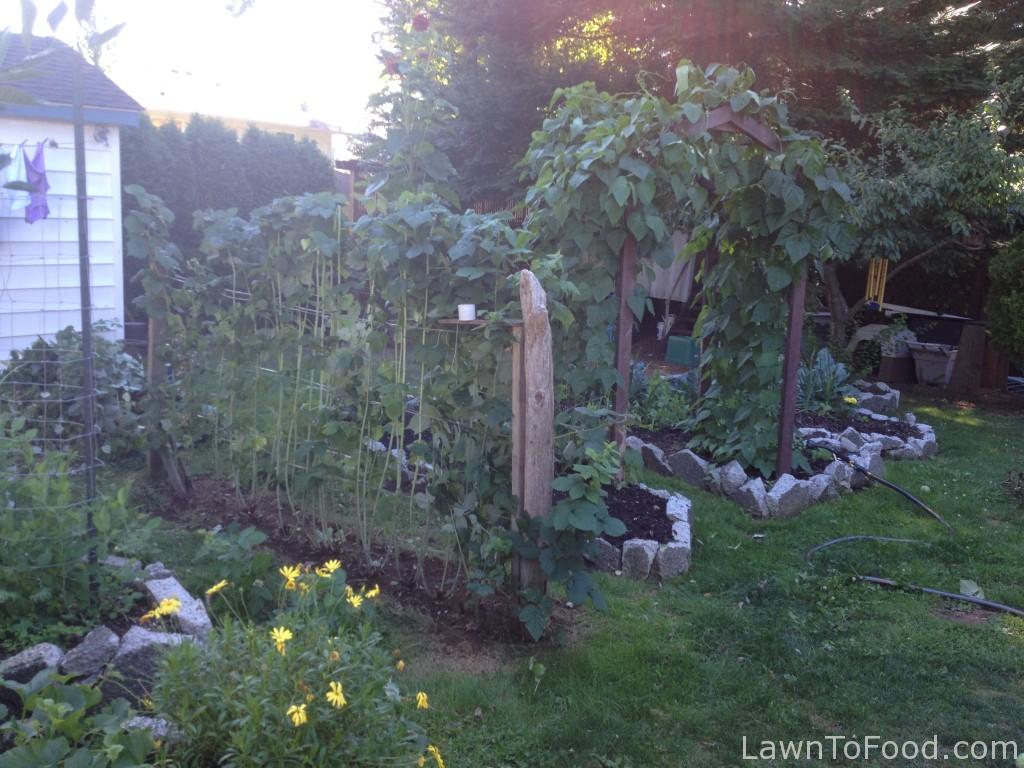 ~ PS I dug up 19 raspberry plants that were growing in the pathway. I’m heading out to the garden now, to plant a new row of raspberries for the years to come ~