Today is a dreary wet day in the Comox Valley. I feel damp and chilled even though the fire is going. To warm myself up I thought I could run around the block in rain gear OR brew up a pot of mexican-inspired chili bean soup. I chose the latter, but also promised myself to walk the dogs this afternoon.

Since it is January, my main cooking focus is to use what was preserved from our summer garden harvest. I started my pot of soup by dicing an onion and mashing some garlic from the pantry. From our winter garden, I plucked 2 stalks of celery and some fresh cilantro out of the cold frame (window on top of a wood box). As the onion, celery and garlic were sauteing in a bit of coconut oil, I added dry spices to release their flavour. Cumin, paprika, smoked paprika, chili powder, coriander (ground cilantro seeds from our garden), oregano (also dried this summer) and a cinnamon stick that will bring a real depth of flavour to the soup.

Next, I added water from the kettle, about 4 cups, and then went to the pantry for other goodies. Firstly, I found the very last pint of Tex-Mex sauce that I had made in the summer of 2014. This was a perfect opportunity to use it up!  In the pantry I also found a pint of kidney beans to add. 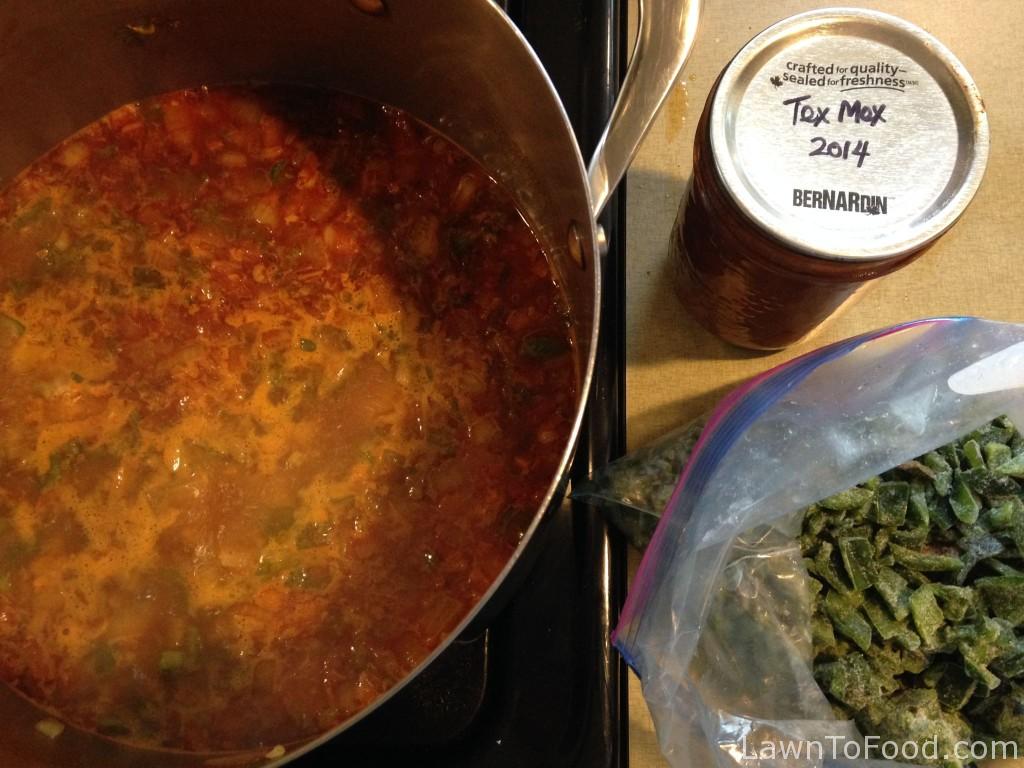 Simmering soup that is about to receive a pint of Tex-Mex tomato sauce and a handful of diced garden peppers.

Last fall, I harvested all the poblano & bell peppers before a hard frost hit. I stuffed the beautiful ones with cheesey goodness for future meals then diced the oddly shaped ones and tossed them into a ziploc freezer bag. Peppers do not have to be blanched before freezing, which makes it so simple to preserve them. I tossed a handful of my frozen diced peppers into the soup pot. 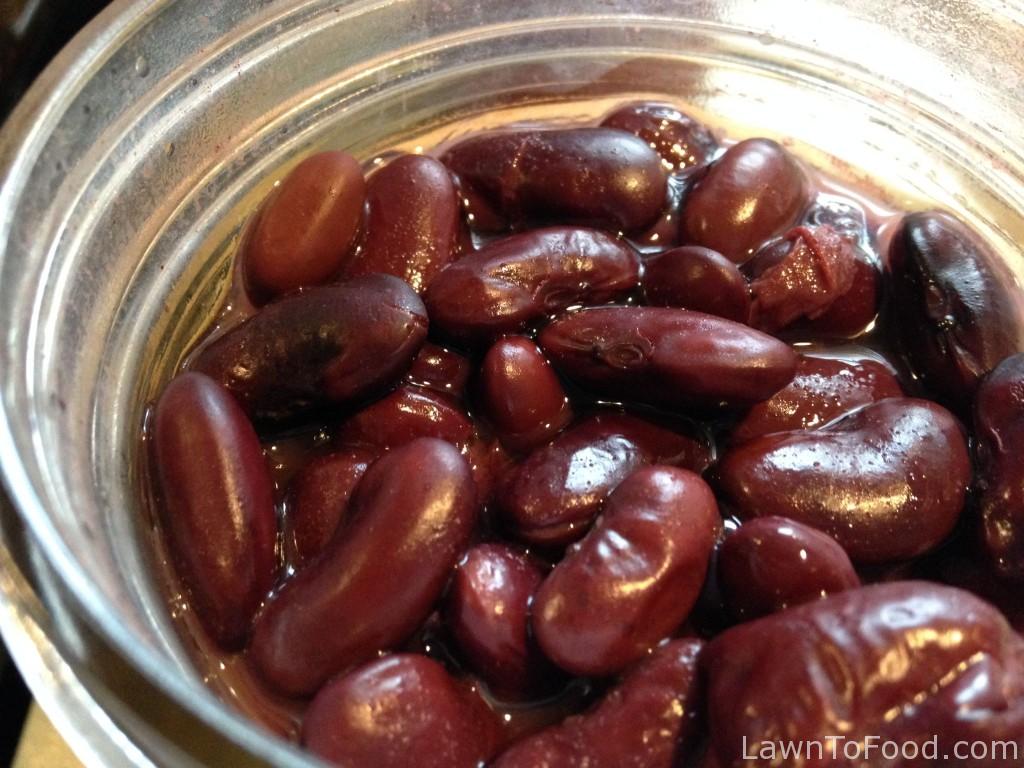 Home-canned kidney beans are really cheap to make and then they’re ready to use in all kinds of dishes. Canning them (or having store-bought canned beans on hand) eliminates the need to soak and cook beans for recipes that require them.

The fresh, and intensely aromatic, cilantro was chopped into small pieces. I slid the cilantro stalks into the soup pot and the leafy greens into a ceramic mexican bowl. If you’re anything like me, you’ll have more than a few pretty dishes kicking around the kitchen. We might as well use them! This dish is from our trip to the Mayan Riviera. Just seeing it brings back the memory of its purchase from a street vendor in Tulum. I mixed the chopped cilantro with sour cream, garlic powder, coriander and Himalayan salt to make a cooling crema for the spicy soup. 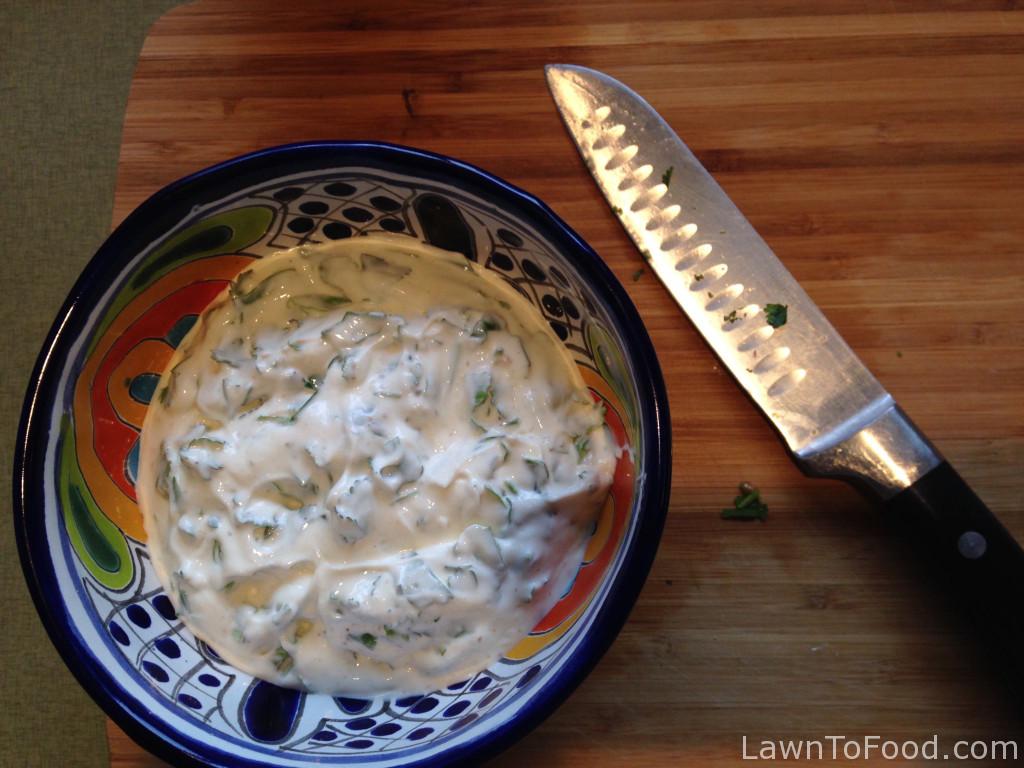 With the soup simmering slowly on the back burner to develop flavours, I headed to the fridge. In typical Lynda fashion, I start adding any suitable leftovers to the soup. I am fairly particular about this process, it’s not a free-for-all completely clean-out-the-fridge kind of thing, I will just select leftovers that compliment the Mexican flavours of the soup. The first thing I saw was pickled broccoli salad ~ to add or not to add ~ No, I decided.

Then some brown rice ~ to add or not to add ~ Yes, however I won’t add it directly into the soup pot (because it would over cook and get mushy), I’ll just put a scoop of rice in the bottom of my bowl, which will be instantly heated by the steaming soup.

I also found a small container of red pepper and spinach alfredo that I served over noodles the other night ~ to add or not to add ~ Yes, because a bit of creamy cheesey is always a good addition, no matter what 🙂 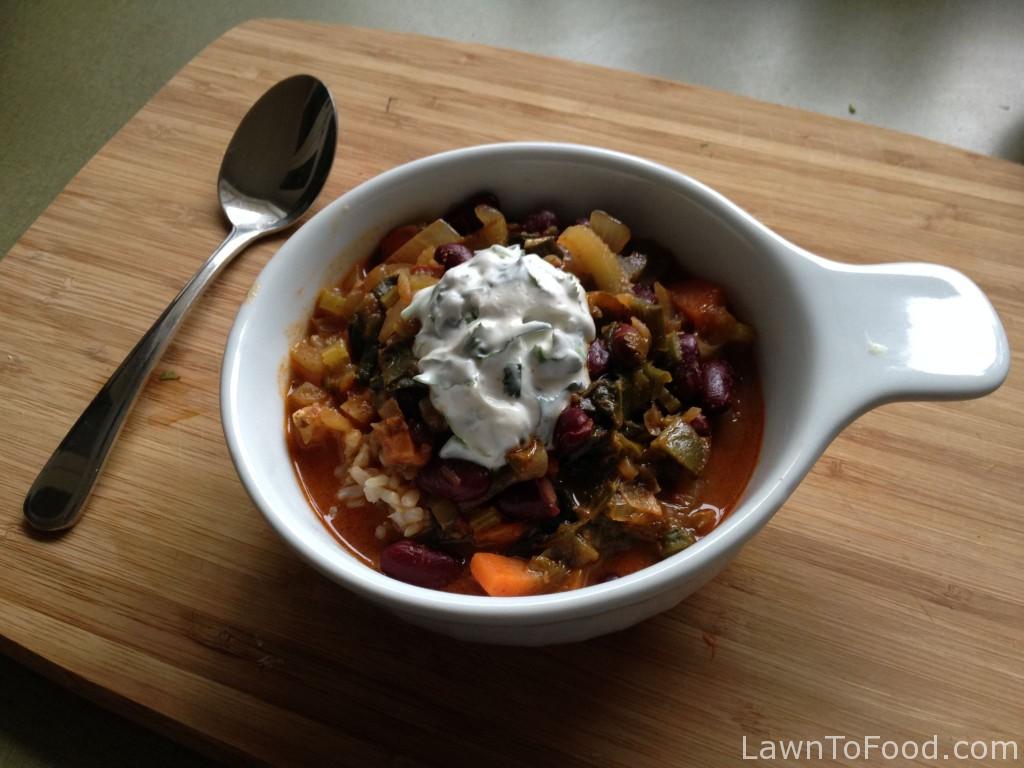